You are here: Home / Activities / Castles in andalucia – which are worth visiting?

As my travels continue into Andalucia, I have decided to add some information on the various castles you can find in here. So every time I come across castles in Andalucia I will add it to this section.

The first one I have come across is el Castillo de Casteller, (Castellars Castle), is at the very top of a hill in Castellar de la Frontera .

Now this castle is beautiful! It is a thirteenth-century Moorish castle. This castle is quite different to other castles in Andalucia, in that it is still inhabited today. I would most definitely advise people to visit if you are in the area. The views from the castle are magnificent! 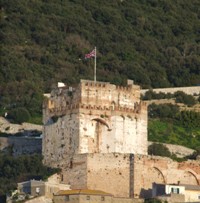 The construction of the Moorish Castle at Gibraltar was commenced in the 8th century AD (possibly AD 711), but there is no record of when it was completed. Its walls enclosed a considerable area reaching down from the upper part of the Rock of Gibraltar down to the sea.

All that remains of the Moorish Castle is the Tower of Homage (pictured left).

Nowadays the Moorish Castle is Gibraltar’s prison. It is also one of Gibraltar’s main tourist attractions. 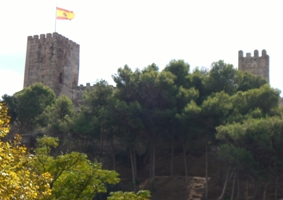 Sohail Castle is perched on a hill on the estuary of Fuengirola River, in Malaga Province. Built by the Moors on the site of an old Roman Fortress, it was one of the first to be built during the Moorish invasion of the Iberian Peninsula.

The castle itself is polygonal in shape with narrow towers at its corners. The main entrance to the castle is through a ramp leading to the defensive gate tower built in the 16th century.

Sohail castle is open to visitors seven days a week between 10am – 9pm. 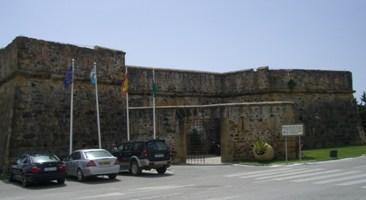 Built in 1767 it is considered to be one of the best examples of 18th century artillery fortifications in this part of the country.

With Gibraltar so close at hand and in the hands of the British, the functions of the castle at Duquesa was to defend the coastline, protecting from attack the points of anchorage within the reach of its cannons.

In addition it further acted as a control on smuggling and with the combination of its resident cavalry and infantry it became a stronghold on the coast.

The design of this small castle enabled all its interior buildings to surround the bailey with wide terraces covering the rooms. The entrance to the castle was protected by a wall built at an angle and a ditch thus allowing access through a drawbridge. Alas both have disappeared today, 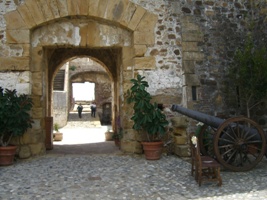 The façade facing the sea was separated from the main castle by a passage-way and over this you can still observe the wide terrace which linked them and which carried the artillery defence position.

During the War of Independence the castle fell to the French forces which occupied the area using the fortifications as a garrison. By the early 20th century it fell into disrepair until in 1975 it was taken over by the Guardia Civil who turned it into their local barracks. Today it is occupied by the Department of Culture of the Manilva Ayuntamiento. 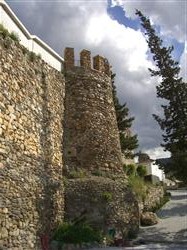 This Nazari castle was built in the 13th Century with the actual town of Seron growing around the castle in the 14th Century. Standing on top of a hill, it dominates the valley of Almanzora.

In 1482, Seron was incorporated into the Crown of Castille, being the home of Mohamed Hacen until in 1492 it was ceded to the Marques De Villera.

The castle is open to the public free of charge and is currently undergoing renovation. 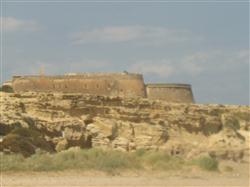 Part of the coastal defence line, the Bateria De San Ramon sits on a headland on the sandy beach of El Playazo in Rodalquilar in Almeria Province.

It is closed to the public as it has been converted into a private residence. Constructed in 1759 it was built as a four cannon battery. It was finished on the 10th October 1768.

This small castle is located right on the beach at Los Escullos in Almeria province.

During the reign of Charles III he built this castle in 1765. One in a line of fortresses stretching along the coast from Garrucha (Almeria) to Manilva (Malaga).

The garrison consisted of 1 officer, 3 corporals and 20 infantry soldiers. It is closed to the public and has been allowed to deteriorate. 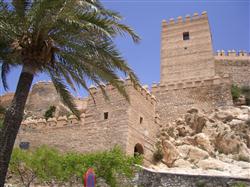 This majestic fortress is Almeria city’s main attraction. Commenced in 955 by Abd-ar-Rahman III of Cordoba it included a great mosque and impregnable city walls which dominate the capital.

After the reconquista the Catholic monarchs took possession of this vast fortified complex which was severely damaged in the earthquake of 1522.

The huge interior is divided into three separate compounds with the Tower of Homage, re-built by the Catholic monarchs, within the third compound at the highest point of the Alcazaba 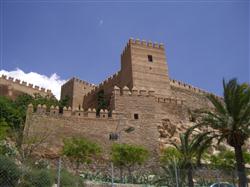 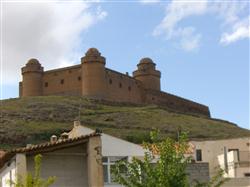 This castle was built between 1509-1512 by Rodrigo De Mendoza as a wedding gift for his wife.

Built on top of the hill dominating the village and the flat surrounding area, it’s domed corner towers are spectacular.

Built from red stone it is an imposing structure. It is now privately owned but open to the public on Wednesdays between 10.00hrs to 13.00hrs and 16.00hrs to 18.00hrs. 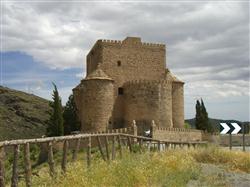 A 16th Century fortress built on high ground dominating the village of Gergal and the surrounding valley.

It has been perfectly restored to its former glory and is privately owned. 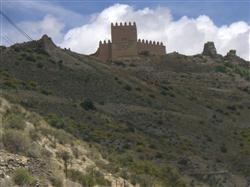 This Nazari Castle which dominates the town of Tabernas stands 80 metres high and was declared of Cultural Interest on the 22nd April 1949.

This castle formed a strategic defence role in the Muslim Kingdom, straddling as it did the old Kingdom of Granada and Murcia. The Arab chronicler Ibn-Al-Jatib recorded that in 1489 it was ceded by Yahia Alnayor to the Catholic Monarchs. 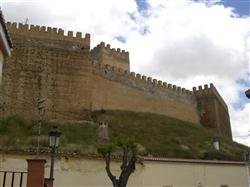 The Alcazaba of Guadix, one of the most important of the Granadan Nazrid Kingdom stands on the highest point of the Islamic Medina.

This construction dates from the 8th Century. The fortress is structured into three precincts with the central one being enclosed by the two outer ones. The central space is heavily fortified with a three tower system.

On the southern side is the second precinct which also once had three defensive towers.

After the reconquest the castle was occupied by the Christian military authorities and at the end of the 15th Century it’s Governor was Don Fernando De Mendoza.

Return to top of Castles in Andalucia

Return from Castles in Andalucia to our Andalucia Travel Guide homepage

Where is the best place to go for Gibraltar bars and restaurants? by … END_OF_DOCUMENT_TOKEN_TO_BE_REPLACED