You are here: Home / Food and Drink / A Mediterranean Diet Menu

What Does A Mediterranean Diet Menu Consist Of?

Spanish cooking, like the country and its people, is colourful, lively and robust. Olive oil and garlic are two of the most common ingredients in a Mediterranean Diet Menu having been imported by the Romans.

Whilst under Arab occupation, which lasted for centuries, it took onboard saffron, pepper, nutmeg and sugar. The discovery of America by Christopher Columbus in 1492 brought new ingredients like tomatoes, peppers, potatoes and chillies.

This infusion of different foods by different races gave rise to what today is recognised as the Mediterranean Diet.

Olive Oil is definitely the most important ingredient in a Mediterranean Diet Menu. Olive oil is nutritious and contains a very high level of monounsaturated fats, most notably Oleic Acid.

The consumption of fish, another important ingredient, at least three times a week has the benefit of increasing the intake of Omega 3 fatty acids. The third pillar of this diet is the generous consumption of fruits, vegetables, legumes, rice and pasta.

Health professionals agree that the Mediterranean Diet is healthier than the Northern European and American diet because more than half the fat calories come from monounsaturated fats which doesn’t raise blood cholesterol the way saturated fats does.

The incidence of heart disease in Mediterranean countries is lower than in Northern Europe and America. 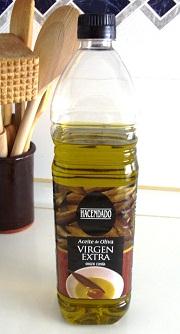 For centuries, the people from the Mediterranean have recognised the benefits of Olive Oil. The hot climate of this region, with the consequent dehydrating effects of the sun and the habitual immersion in the sea would dry the skin and this was soothed by the use of Olive Oil, both internally and externally, as a skin hydrating agent.

Since that time, Olive Oil in the diet has been seen as one of the healthy oils. Today, over 1.8 million tonnes of Olive Oil are consumed worldwide, a large percentage of which is produced in Andalucia.

Generally Olive Oil is extracted by pressing the olive and the amount of processing involved will determine the variety of the oil.

Extra Virgin – considered the best is obtained from the first pressing of the olive.

Pure – This oil is filtered and refined.

Extra Light – Is subjected to considerable processing and this is reflected in its mild olive flavour.

Extra Virgin oil is of the highest quality which as explained comes from the first pressing and is extracted via a cold press.

Always remember when buying Olive Oil that the less the oil is handled, the closer to its natural state, the better the quality of the oil is.

Andalucia has a long coastline stretching from the province of Almeria to the province of Huelva which borders Portugal. All along this coastline are numerous villages whose main industry has been fishing, going back centuries.

The availability of fresh fish and shellfish is clearly on view at every Mercado and supermarket. The variety of species is also on show, so no wonder that the second main ingredient in a Mediterranean Diet Menu, behind Olive Oil, is fish.

As previously mentioned, the consumption of fish and shellfish contributes to the intake of fatty acids which benefits health.

Agriculture is one of the main industries of Andalucia given the rich and fertile soil and long hours of glorious sunshine throughout the year. The wide variety of the fresh produce allows us to have at our disposal, any ingredient we may need in our kitchen in order to produce exquisite and healthy dishes, rich in vitamins.

There is no excuse for not using fresh fruit and vegetables in Andalucia, no Mediterranean Diet Menu would be complete without it.

Although not part of the Mediterranean Diet, red wine is an integral part of the Andalucian meal. Red wines contain several antioxidants beneficial to good health.

The main characteristic of these antioxidants is the prevention of disease. These antioxidants help in the reduction of bad cholesterol. In addition it helps cleanse the body of toxins and can act as a blood thinner which can lower blood pressure. However, moderation is the key and the daily intake should revolve around two glasses a day.

In all the recipes on this site, we only use Olive Oil and fresh fish and vegetables. We have included some meat dishes which form a minor part of the Mediterranean Diet allowing for its low consumption. Our recipes are not designed as a weight loss programme but as a healthy and balanced way of eating.

Always remember that moderate consumption is the key to good, healthy living. Enjoy!!!

Where is the best place to go for Gibraltar bars and restaurants? by … END_OF_DOCUMENT_TOKEN_TO_BE_REPLACED