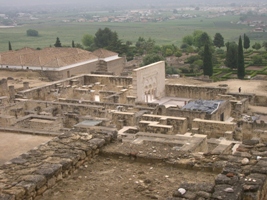 The 1000 year old ruins of the forgotten city of Medina Azahara are a remarkable site.

Built approximately five kilometres from the city of Cordoba the ruins were buried until about 95 years ago.

However, before it was buried Medina Azahara was the largest known city in Western Europe to have been built with a new canvas – there were no previous ruins.

The legend behind the city is that Ad bar-Rahman III the Caliph of Cordoba built the city for his wife who apparently missed the snow capped mountains of her home in Syria. To keep her happy and to also show off his power to the rest of the world he decided to build a city with lush gardens, exquisite palaces and to also make it into a trading centre.

The site of the city was very strategic. Located between the sierra and the plains it has wonderful views of the surrounding countryside. The entrance to the site is at its highest point and as you enter the view is spectacular as you can basically make out the entire layout of the city.

Although researches estimate that only 10% of the entire city has been excavated what they have discovered provides evidence of what would have been a capital city – the capital city of al-Andalus.

There are several excavated areas that are particularly impressive.

Ya’far House is certainly a ruin, but add a bit of imagination to the walls around you and you can picture a majestic building that was supposedly home to the Prime Minister of the Caliph.

The High Basilican Building appears to have been used for official purposes and not as a residence. Some of the construction is still intact and the arches are particularly interesting.

The Drawing Room of Abd Al-Rahmann contains some of the best preserved architecture in the entire city. There are wooden carvings decorating the walls and the distinctive pillars and arches that are similarly found in the Mezquita.

Where is the best place to go for Gibraltar bars and restaurants? by … END_OF_DOCUMENT_TOKEN_TO_BE_REPLACED