You are here: Home / Gibraltar / History of Gibraltar 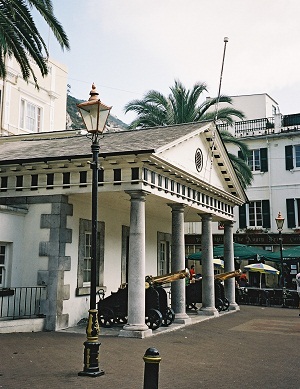 Many people have asked for a quick rundown on the history of Gibraltar, so here is a little bit to wet your appetite.

Gibraltar is located on the southernmost tip of the Iberian Peninsula. Historically a strategic vantage point and as a result was fought over for hundreds of years. The ‘Rock of Gibraltar’ overlooks the Mediterranean.

It is one of the remaining overseas UK territories and has a land border with Spain. It is a very popular tourist destination.

Gibraltar has attracted visitors for centuries. Its sheer physical presence is unique. It is a British Overseas Territory located at the southernmost tip of the Iberian Peninsula, overlooking the Straights and linked to the Spanish mainland via a narrow isthmus.

Despite its imposing appearance, the territory only covers 2.50 square miles and the head of state is the British Queen Elizabeth II. There is evidence of human habitation on the famous Rock of Gibraltar as early as Neanderthal times and Phoenicians settled in the area circa 950 BC. This is the only place in Europe where monkeys roam free in a semi-wild state, reflecting the rock’s rich natural history, which flourishes in a sub-tropical climate.

Throughout the history of Gibraltar there have been numerous land grab attempts.

Amongst its past inhabitants were the Carthaginians and Romans, and after the collapse of the Roman Empire. It came under the control of the Vandals and formed part of the Visigothic Kingdom of Hispania until its collapse due to the Moslem conquest of 711 AD when the Umayyad general Tarik Ibn Ziyad led a Berber army across the Strait from Ceuta in northern Morocco.

Gib then became part of the Kingdom of Granada until 1309 when it was re-conquered by the Spanish Duke of Medina Sidonia in 1462. In 1501 it was granted its coat of arms by a Royal Warrant passed in Toledo by Queen Isabel of Castilla.

In 1704 a joint British and Dutch force captured Gibraltar and British sovereignty was subsequently recognised in the 1713 Treaty of Utrecht, which ended the War of the Spanish Succession. We subsequently became an important naval base for the British Royal Navy and played an essential part in the Battle of Trafalgar.

Today Gibraltar is steeped in history; an intertwining of civilisations and culture which dates back many thousands of years. It is a living history reflected not just in the Gibraltarians themselves but also in the many legacies that remain to this day.

This includes a number of pre-historic caves and a Moorish castle and baths that date back to the 11th Century. The architecture is composed of Georgian and Victorian buildings interspersed amongst Portuguese, Genoese and Moorish buildings.

However, it is the caves that were man’s first home on this Rock. In 1848 an ancient skull was discovered at Forbes Quarry, at the foot of the steep northern face. Then just eight years later, an identical skull was discovered, this time in the Neander Valley near Dusseldorf.

“Neanderthal man” should really have been “Gibraltar Woman”.

Return from The History of Gibraltar to Gibraltar Information

Where is the best place to go for Gibraltar bars and restaurants? by … END_OF_DOCUMENT_TOKEN_TO_BE_REPLACED