Reputedly the oldest city in Europe, Cadiz city was founded by the Phoenicians over 3000 years ago.

An important trading post was subsequently established by the Romans and its seafaring links are reflected by its charming buildings.

Some of its 18th century walls still stand and a visit is recommended to the old quarter of the city.

Here you will have to navigate through the narrow, cobbled streets which regularly open into squares.

Although somewhat run down this area still retains the Moorish influence.

It is a typical Andalucian city with well preserved historic landmarks. Amongst its numerous public parks, there are giant trees believed to have been brought to Spain by Christopher Columbus during his travels and these flourish amongst exotic plants in the warm and sunny climate.

Cadiz was originally founded as Gadir by the Phoenicians who turned it into their most important enclave and trading post in the Iberian Peninsula.

Around the period of 500 BC it fell to the Carthaginians and became a base of operations for Hannibal’s conquest of Southern Iberia. In 206 BC the Roman General Scipio Africanus conquered the city turning it into a flourishing Roman naval base and the principal city of the Roman occupation.

Under the Moorish rule between 711 and 1262 AD the city was called Qadis and this continued until 1262 AD when the Moors were finally conquered by the Spanish King Alphonso X of Castille.

During this period, the city experienced a renaissance with Columbus sailing from Cadiz on his second and fourth voyage of discovery.

Consequently, Cadiz became the home port of the Spanish treasure fleet and a major target for its enemies. Several English Admirals amongst whom were Sir Francis Drake, Admiral Robert Blake, Sir George Rooke and Lord Nelson all attacked the city at one time or another.

Cadiz has too numerous monuments to list but the following are must visit on any itinerary: 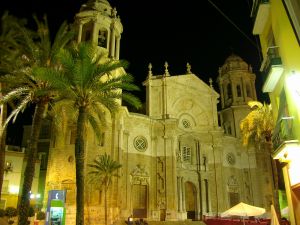 Catedral Nueva (new cathedral) – An imposing structure crowned with a golden dome is the best way to describe this 18th century Baroque cathedral.

The peace and serenity within the structure is evident to the visitor although this is occasionally broken by people who stand in the middle of the circular floor and make a noise which is wonderfully echoed off the walls.

It took 116 years to complete so the mix of styles is evident. The towers and the sacristy were the last to be built. The vaults of the high alter are particularly noteworthy.

Visitors to the Cathedral can now climb the Torre de Poniente (Western Tower) accessing the bell-tower from where you get a panoramic view of the city.

The Gran Teatro Falla, is another great sight. Originally constructed in 1871 and rebuilt between 1884 and 1905, it is a beautiful building. It’s Cadiz main place for theatre and music and holds the Carnaval competitions.

The Tavira Tower is one of more than 160 towers within the city from which local merchants would look out to sea for arriving merchant ships during the 18th Century.

The Casa Del Almirante (Admirals House) is a palatial home built in 1690 by the family of the admiral of the Spanish treasure fleet, Don Diego De Barrios, with the proceeds of the lucrative trade with the Americas.

The Baluarte De La Candelaria military fortification, constructed in 1672. It is protected by a massive sea wall with cannons commanding the channel and approaches to the port.

Cadiz is an amazing city with well preserved landmarks and an amazing story to tell.

The Beauty of Caños de Meca

Where is the best place to go for Gibraltar bars and restaurants? by … END_OF_DOCUMENT_TOKEN_TO_BE_REPLACED