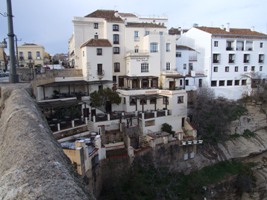 Ronda – one of the oldest and most beautiful towns in Spain

The mountainous interior of Malaga Province is sprinkled with beautiful white villages, including Ronda.

Rising amid a circle of mountains is Ronda, one of the oldest towns in Spain, which also has one of the most dramatic locations, having been built on an isolated ridge of the Sierra and slashed in half by the Tajo Gorge.

The gorge is spanned by three bridges.

Next to it the Puente Viejo, was built in 1616 whilst the new bridge, Puente Nuevodates back to 1788 and spans the sheer 130m drop with white washed houses clinging to its precipitous edges.

The town is associated with bandits and bullfighters. The bullring is one of the oldest in Spain and was where the great matador Pedro Romero lived, fought and died.

It is also the birthplace of La Maestranza, an order of knights who laid down the rules for early bullfights performed on horseback.

Bandits roamed the mountains in the 19th century robbing travellers heading to Ronda and the town has a colourful and romantic past in Spanish folklore.

Writers and romantics were attracted in the 20th century to Ronda. Ernest Hemingway wrote two books which feature the town: “Death in the Afternoon” and “For Whom the Bell Tolls”. The famous actor Orson Welles is buried here.

Look for accommodation in Ronda

Where is the best place to go for Gibraltar bars and restaurants? by … END_OF_DOCUMENT_TOKEN_TO_BE_REPLACED